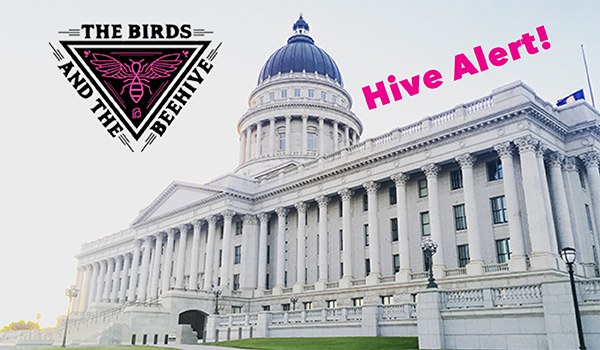 The 2020 Utah Legislative Session is officially over! It was a wild and crazy 45 days and absolutely one of the worst sessions for reproductive rights in quite some time. We, along with allies and all of you, worked tirelessly to combat 3 anti-abortion bills, and we DID make a difference! Last night, the mandatory ultrasound bill died!

H.B. 364, Representative Christiansen’s mandatory ultrasound bill, would have forced people to obtain and pay for a medically unnecessary non-consensual ultrasound 72 hours before they get an abortion. It was not about health care, safety, or informed consent, but about shaming women for their choices and taking away their ability to lead free and fulfilling lives with dignity and agency.

In case you missed it, on Tuesday night, all six women Senators, 2 Republicans and 4 Democrats, walked out of the vote in protest of this deeply intrusive bill. The bill passed the Senate in a vote by only men but was stalled in the House and died when the clock ran out last night.

This bill died because SO many stood up and spoke up against it. We thank every legislator who voted no, spoke up, and helped stop its progress. We thank each of YOU who called, wrote, and spoke out against this harmful legislation, most especially the women who publicly shared very personal experiences to illustrate the severe impact this bill would have had. This victory belongs to each of us and shows us that our voices DO matter!

Now for the bad news…

S.B. 174, Senator McCay’s abortion ban, passed the Legislature in the final hours last night and will go to the Governor. This “trigger” bill would ban almost all abortions in Utah if the Supreme Court overturns Roe v. Wade. This extreme legislation goes too far in inserting government into our personal, private lives and is out of touch with what Utahns want. Everyone should have access to the health care they need without politicians controlling when, how, or why. Politicians have no right to impose their personal beliefs on everyone in our state.

We will soon be in touch with ways to take action against this bill. Because of the coronavirus, we will NOT be organizing a rally. We will be organizing ways you can take action from home. For now, start calling the Governor and ask him to VETO S.B. 174. Contact him here.

If access to abortion has impacted your life or the life of someone close to you — please share those stories with the Governor. He needs to hear that abortion is a needed and necessary part of reproductive health care and without it, Utahns’ health and agency is at risk.

Lastly, as we told you last week, the third anti-abortion bill this session, S.B. 67 — Senator Bramble’s fetal tissue bill, also passed the legislature and will go to the Governor’s desk. Despite Senator Bramble’s claims that this bill gives women more choices, it clearly does not. This bill is more governmental intrusion into a deeply personal experience. Please ask Governor Herbert to VETO S.B. 67.

Thank you for your support during this difficult session. The fight isn’t over, but we’ve won some battles and know what we need to do next.